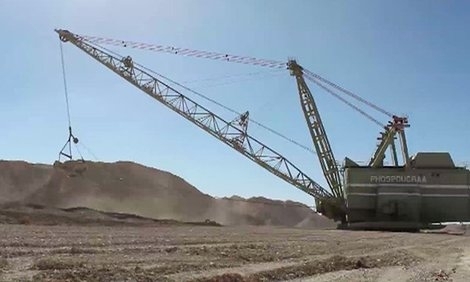 Melbourne (Australia), Dec 17, 2016 (SPS) – Australia Western Sahara Association (AWSA) has denounced the involvement of Incitec Pivot Ltd (IPL) in the plunder of phosphate from Western Sahara against the wishes of the Saharawi people, in a statement Friday.
Below is the full text of the statement:
“Australia Western Sahara Association
Incitec Pivot Ltd (IPL) plunders phosphate of Western Sahara against the wishes of the Saharawi people
On this very day, 16 December 2016, the day of the Annual General Meeting of fertiliser and explosives company, Incitec Pivot the Tubarao is to come into Geelong delivering phosphate from Bou Craa mine in Western Sahara to the INCITEC PIVOT plant at North Shore, which processes superphosphate fertiliser used in pastoral agriculture and for some crops.
Yet it is clear that the Saharawi people do not wish this.
The problem is that IPL is buying from a Moroccan state-owned company, OCP, which legal experts say is not entitled to sell the product.
One of these legal experts, Hans Corell, told the United Nations in 2002 that the exploration and exploitation of the resources of Western Sahara, could only be done when regard is taken for the interests and wishes of the Saharawi people and to their benefit. www.arso.org/UNlegaladv.htm
The Saharawi people say they have not been consulted. Their independence movement, the official representative in the UN peace process, the Polisario Front, say they have not been consulted either.
It can be disputed whether there have been benefits flowing to the local community under Moroccan control, but clearly nothing at all has gone to the other half of the Saharawi population who fled to refugee camps in Algeria when Morocco invaded in 1975. They get no benefit whatsoever.
In fact it makes it worse as the continuation of “business as usual” in occupied Western Sahara impairs efforts towards solving the conflict.
Corell added later that it follows “that Morocco would have to engage in proper consultation with persons authorised to represent the people of Western Sahara”.  The UN Human Rights Council’s Center for Civil and Political Rights on 4 Nov 2016 agreed that “Morocco should reinforce the consultative process with the people of Western Sahara with the goal of obtaining their prior, free and informed consent to [resource] extraction operations”. They see it as part of the right to self-determination of the Saharawi people, which still waits to be addressed.
“The business community can make a contribution to the search for a solution of the situation [in Western Sahara] by acting in conformity with the principles of corporate social responsibility”, says Corell.  We agree.
The Australia Western Sahara Association will be asking at the IPL AGM for Incitec Pivot to do the right thing.” (SPS)
Origen: AWSA denounces involvement of IPL in plunder of phosphate from Western Sahara | Sahara Press Service